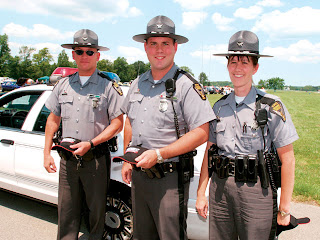 While though the Fitzgerald brothers dad runs the highway patrol show even rethugblicans have some insight that this is probably illegal as per CREW:

"Wisconsin Governor Scott Walker and his Republican cohorts in the legislature have some explaining to do. The rookie governor rose to national fame after picking a bare knuckled political fight with Democrats over union rights. He showed up on our radar when he illegally sent in the Wisconsin State Patrol (WSP) to search for the Democratic state senators who had fled to Illinois.

On February 23rd, we submitted open records requests to the Office of the Governor, the Office of Senate Majority Leader Scott Fitzgerald and the Wisconsin State Patrol (which is headed by Sen. Fitzgerald’s father, Stephen Fitzgerald) asking for any records of communications regarding the decision to send troopers out after the legislators. Their responses were surprising.

Several documents produced by Senator Fitzgerald’s office clearly show his staff was well aware there was no legal authority to dispatch the troopers, and that doing so would have required - at the very least - an amendment to Senate rules. No legislative fix was ever passed, but the troopers were deployed anyway.

Meanwhile, the Wisconsin Department of Transportation, which houses the WSP, claims to have no documents about the whole debacle. That seems unlikely. An unprecedented request made of the WSP by the governor and the majority leader, yet there is not one single record about the affair. Do you believe that? Neither do we.

As for the governor, his office is stonewalling, claiming that due to the “breadth” of the request, it could take weeks for his office to respond. Nearly three weeks later, still nothing. We’ll keep after him.

Back in February, CREW filed a complaint with the nonpartisan Government Accountability Board over the misuse of state troopers, and today provided the board with this new information.

It seems pretty clear that Gov. Walker and Sen. Fitzgerald knowingly violated the law. It’s up to the Government Accountability Board to hold them accountable."
Posted by WINston smITh at 8:45 PM

Absolutely. Great post. I can't wait for the guys with those goofy ranger hats to stop me for speeding. It will be fun to ask them how they feel about being FitzWalkerStan's standing army. Keep up the good work. Later.

i googled "wisconsin army" and stumbled your post. good aricle, though i wish wisconsin had a private militia, with wisconsin's intrest in priority. i'd join :)

You should consider finding a different picture. Those are state troopers from my state Ohio. Not your state. I only read your blog because I wanted to know who the cute female trooper was. Thanks for leading me astray pal.