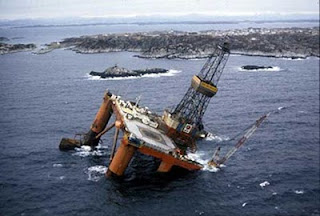 Peak Generation provides one the more incisive synopsis of the current Petronobyl catastrophe, here is the whole post since it is so on target:


"Wednesday, June 30, 2010
Apocalypse watch: BP’s Gulf disaster as reality TV
If French intellectual Jean Baudrillard were still alive to deconstruct the unfurling Gulf oil disaster, I’m sure he’d marvel at the hyperreality of it all. Me, lacking the vocabulary, I’m going to call it reality TV.

True to the genre a dysfunctional cast – Tony Hayward, Barack Obama and Martin Feldman – must coexist in an unlikely situation, promoting themselves while being constantly upstaged by video footage from robots 5,000 feet (1,500 m) below sea level. Watch as they try to cope with reality, each other, and their investment portfolios! Squirm as they star in their own tragedy! Gasp as Hayward, left, reassures you that there’s nothing toxic about the dispersal chemicals!

Want drama? The Gulf of Mexico is becoming toxic, poisoned by both the crude oil surging out of BP’s ruptured well and the million-plus gallons of chemical dispersant, Corexit 9500, being dumped on the slick. Oil is making landfall along the area – if whipped up by a hurricane, it would likely be sprayed over communities along that seaboard – and, it is claimed, a mixture of oil and Corexit seems to be raining throughout the region causing widespread crop damage. People helping clear the oil are coming down with a range of symptoms that suggest poisoning, just as they did after the Exxon Valdex cleanup.

How about some tension? The oil is still gushing out, and the poison is still being sprayed. The blowout preventer is widely believed to be on the verge of collapse, and relief wells might be facing an impossible task, depending on what is left of BP’s wellbore – we don’t know much about this, because no-one will tell us. But then, that’s reality TV for you.

But viewers, I’m jumping ahead of myself – let’s go back to the start of this sorry mess.

BP had problems with its Macondo well long before the Gulf disaster, according to documents and emails released by the House Energy and Commerce Committee. As Bloomberg reported, cracks in the well date “as far back as February”:

On Feb. 13, BP told the minerals service it was trying to seal cracks in the
well about 40 miles (64 kilometers) off the Louisiana coast, drilling documents
obtained by Bloomberg show. Investigators are still trying to determine whether
the fissures played a role in the disaster.

The company attempted a “cement squeeze,” which involves pumping cement to seal the fissures, according to a well activity report. Over the following week the company made repeated attempts to plug cracks that were draining expensive drilling fluid, known as “mud,” into the surrounding rocks.

The problems continued. Rumours from industry professionals writing on The Oil Drum have suggested that BP experienced numerous blowouts over this period. Again from Bloomberg:

On March 10, BP executive Scherie Douglas e-mailed Frank Patton, the mineral
service’s drilling engineer for the New Orleans district, telling him: “We’re in
the midst of a well control situation.”

[We let the scene on the Deepwater Horizon fade out, and cut to Hayward. We see him putting in a vital telephone call in mid-March – to his stockbroker.]

The chief executive of BP sold £1.4 million of his shares in the fuel giant
weeks before the Gulf of Mexico oil spill caused its value to collapse.

Tony Hayward cashed in about a third of his holding in the company one
month before a well on the Deepwater Horizon rig burst, causing an environmental
disaster.

Mr Hayward, whose pay package is £4 million a year, then paid
off the mortgage on his family’s mansion in Kent, which is estimated to be
valued at more than £1.2 million.


This alleges Hayward “disposed of 223,288 shares on March 17.” It clearly states he did nothing legally wrong. They were his shares to sell.

Then the showstopper: the April 20 Deepwater Horizon explosion, killing 11, and sending tens-of-thousands of barrels of crude oil surging into the Gulf every day.

The next cast member featured is Obama, who addressed the nation on June 14, and, by default the rest of the globe: his take on the world’s worst environmental disaster was of interest to billions. His 18-minute address contained more military metaphors than the average sport report – his government’s "battle" against the "siege" in the Gulf of Mexico (we will fight it on the beaches, we will fight on the fields and in the streets, we will fight in the hills. . .) – but no real content.

He had the opportunity to mention peak oil – the reality behind the need to drill in 5,000 feet of ocean, around the depth of the Titanic’s resting place. But, of course, Wall Street would never allow Obama to do that. He did enough to let a knowledgeable audience know he’s no fool, but he worded it in terms that would not alarm Joe Sixpack. From the transcript:

After all, oil is a finite resource. We consume more than 20 percent of the
world's oil but have less than 2 percent of the world's oil reserves. And that's
part of the reason oil companies are drilling a mile beneath the surface of the
ocean: because we're running out of places to drill on land and in shallow
water.

This was wrapped up in notions of energy security, fears of foreigners (“Each day, we send nearly $1 billion of our wealth to foreign countries for their oil”) digs at political adversaries (“. . . the path forward has been blocked, not only by oil industry lobbyists, but also by a lack of political courage and candor”) and good old pork barrel hoopla that “the transition to clean energy has the potential to grow our economy and create millions of jobs.” (Which it has, in theory, although transition should not be presented as something to do in addition to plasma TVs and SUVs; it’s a willful downsizing of the supposedly non-negotiable way of life.)

Just another politician’s speech – but it got the ratings – watched by 32 million US viewers.

Next in our production, some intrigue. . . The man who, to most of the media is Mr. Peak Oil, Matthew Simmons lurches to centre stage. With a rumpled shirt and flushed face, he tells how insiders have told him that massive amounts of oil are pouring through BP’s fractured well and coming up at various points on the ocean floor, and that the chances of capping the gusher are so slim Obama may as well nuke it. The allegations make more impact online, going viral. Simmons, putting his money where his mouth is, seizes the opportunity to short some 8,000 BP shares.

At this point in the broadcast, we need some glamour if we want to get the ratings back up, and what beats a yacht race to bring together the rich and the beautiful? A quick edit will switch the scene to Hayward’s June 20 yacht jaunt around the Isle of Wight. After all, the waters, around the Isle of Wight, were clear of oil. What a great day out on the ocean; what a great photo op for our gaffe-prone star. . .

He’s in the role of a charming, lovable rogue. What this reality TV show needs is a villain. Enter the activist judge.

Obama wanted a six-month freeze on deepwater drilling, presumably along the lines that this is how long it will take the news media to go on to a new topic, allowing him to safely hand the drilling permit rubber stamps back to the industry. But that’s not how Judge Martin Feldman sees it.

Part arbiter of justice, part energy investor, Justice Feldman acted deftly to sell his oil stock and overturn Obama’s drilling moratorium – all in the same morning. According to Associated Press:

A statement released by U.S. District Judge Martin Feldman's chambers in New
Orleans says the judge instructed his broker to sell his stock in Exxon and a
subsidiary as soon as the market opened June 22. That was the day after the
hearing.

Feldman says his broker told him his stock was sold several
hours before he struck down the Obama administration's drilling moratorium. The
judge also said he didn't know if he made a profit or loss on the sale.

Exxon isn't a party in the case, but the company had one of the 33
existing exploratory rigs shut down by the moratorium imposed because of the
Gulf spill.

No-one is accusing the judge of letting his energy investments colour his judgment – he is a judge, after all – but if nothing else, it’s normally considered good manners to declare an interest. Memo to Feldman: suggesting that you might have made a loss on the deal is not the same thing.

Meanwhile, viewers, the blowout preventer deathwatch continues. . . how far is it leaning today? How much of BP’s compromised wellbore will it take with it when it collapses? Can the relief wells get in place before the whole thing goes? Don’t forget to tune in tomorrow, folks.

[Fades out on shots of Obama looking like he wants a cigarette, Hayward on his yacht, and Feldman standing up for the poor downtrodden oil execs.]

In terms of entertainment, is this scraping the barrel? Actually, yes. Millions of them, all told, from the beaches, wetlands and waters of the Gulf of Mexico. An estimated 35,0000 to 60,000 barrels have been gushing out every day since April 20, according to the government – and many more according to Simmons – but the current containment system can only handle up to 28,000 barrels per day."
Posted by WINston smITh at 9:53 PM