Petronobyl: It gets worse everyday 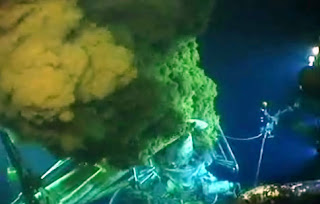 Amazingly the horrible situation in the gulf worsens on a daily basis. I expect at some point to hear the entire world ocean has been killed. This is a corporate crime of the first magnitude. All ready republican apologists are weighing in with ludicrous protection for these goons. In the meantime the estimates get bigger as to the actual amount of polluting hydrocarbons. McClatchy has been doing an amazing and enormous amount of reporting and it is not reassuring:

" WASHINGTON — The Obama administration on Thursday doubled its minimum estimate of how much crude oil was gushing from the Deepwater Horizon oil well, saying a panel of scientists had concluded that 20,000 to 50,000 barrels, or as much as 2.1 million gallons, were pouring into the Gulf of Mexico every day before BP sheared the well's riser pipe on June 3.

That action, which BP engineers undertook to fit a "top hat" containment dome over the well, almost certainly increased the flow, and Dr. Marcia McNutt, the head of the U.S. Geological Survey, said an estimate of the flow since June 3 would be available in a few days.

"Our scientific analysis is still a work in progress," McNutt said.

The announcement that tens of thousands more barrels of oil than previously estimated have been spewing into the Gulf for weeks added to a growing sense that neither the federal government nor BP correctly assessed the size of the unfolding disaster or marshaled enough resources to meet it.

"It's hard to keep track of all the false estimates and false promises," said Jeremy Symons, a senior vice president of the National Wildlife Federation: "The BP gusher is worse than ever, and big nature is losing its battle with big oil."

Separately Thursday, BP and the Coast Guard acknowledged that their hopes of removing 28,000 barrels of crude from the water daily beginning perhaps next week depend on a largely untested plan to burn more than a third of that oil.

How much oil is flowing from the well has been the subject of heated debate for weeks. BP initially said the well was losing only 1,000 barrels a day, then increased that estimate to 5,000 barrels, a figure that both BP and the Obama administration stuck with for weeks until scientists, examining previously undisclosed video of the spewing oil, testified to Congress that the flow might be as much as 95,000 barrels a day, or nearly 4 million gallons.

Under pressure from Congress, the Obama administration assembled a group of university researchers into what it called the Flow Rate Technical Group to assess the spill. The group released its first preliminary estimate on May 27, providing two minimum estimates, 12,000 to 19,000 barrels a day and 12,000 to 25,000 barrels a day. The group said, however, that it didn't have sufficient data to quantify the spill's likely maximum flow. On Monday, one of the scientists told McClatchy that he thought the rate after the riser was cut might be 100,000 barrels a day.

McNutt said the new estimates came after three teams of researchers reviewed new data and video from before the June 3 shearing of the riser. One of those teams was led by Energy Secretary Steven Chu, a Nobel laureate in physics.

One team, basing its estimate on an analysis of new high definition video, said the leak prior to June 3 was 25,000 to 40,000 barrels a day. A second team, using aerial and satellite photos of the spill, said the average flow was 12,600 to 21,500 barrels a day. A third team from the Woods Hole Oceanographic Institution in Massachusetts used sonar-like measuring of the flow to conclude that 25,000 to 50,000 barrels of oil have been flowing from the well.

The new estimates suggest that despite engineers' success in capturing an increasing amount of oil — BP said 15,800 barrels of oil was recovered from the well on Wednesday — there seemed to be no reduction in the volume of oil billowing from the well.

This week, Coast Guard Adm. Thad Allen said he hoped to increase the amount recovered from the Gulf to 28,000 barrels a day by pushing the Discoverer Enterprise drill ship past its stated 15,000-barrel-a-day capacity to 18,000 barrels a day, and adding a second vessel, the Q4000, which he said would collect 10,000 barrels a day.

However, BP's vice president for operations, Kent Wells, said Thursday that all the oil recovered by the Q4000 would be flared, and Allen acknowledged that he'd misspoken Wednesday when he suggested that at least 5,000 barrels would be stored and resold.

Environmentalists and health advocates questioned the decision to burn the crude, saying the burn would produce toxic byproducts that could affect both workers aboard ships in the Deepwater Horizon area and residents in coastal areas. The Q4000, which wasn't designed to burn crude and is now being fitted with a burner, has a crew of 122, and there are scores of ships in the Deepwater Horizon vicinity, which is beyond the jurisdiction of the Occupational Safety and Health Administration.

"If the weather conditions are such that it's blowing on shore and local communities are getting that soot, there are a lot of toxic constituents in it," said Diane Bailey, a senior scientist at the Natural Resources Defense Council.

BP spokeswoman Anne Koltun said the Environmental Protection Agency was consulted on the flaring plan. An EPA permit isn't required because the Deepwater Horizon site, 84 miles off the Louisiana coast, is outside the agency's three-mile jurisdictional limit.

Burning the oil also would reduce the amount of money that BP would earn from selling the crude, which the company has promised to donate to a fund to restore and improve wildlife habitat in the four states most damaged by the spill.

"They're essentially burning money that could be used for gulf restoration," said Christopher Mann, a marine policy and science expert at the Pew Environment Group. The price of crude oil settled Thursday at $74.39 a barrel, though BP has said it's likely to get less for the oil recovered from the Deepwater Horizon well.

Mann also questioned why 52 days into the disaster, BP and the Coast Guard still hadn't moved tankers or other ships into the area to accommodate the volume of crude oil likely to be flowing from the damaged well.

"BP has known for weeks they'd be recovering large amounts of oil, and yet they now don't have the capacity to recover it," he said. "There's a continuing failure to connect the dots."

"Can you spit without hitting a tanker in Houston?" he asked.

Koltun said burning the oil instead of loading it onto a barge and selling it was "the most efficient way" to handle the oil "and allows us to collect the greatest capacity."

EPA spokeswoman Adora Andy said the agency had encouraged BP "to come up with every technological option available to reduce the amount that is burned," but added that burning could help reduce the amount of oil in the water.

BP's Koltun said the flaring would continue until at least July, when BP hopes to have a longer-term containment plan in place. The leak will not be stanched, officials have said, until the well is intercepted by one of two relief wells that won't be completed until at least August, and perhaps later.

Koltun said the number of barrels burned would be tracked by a "multi-phase flow meter" that has been installed on the Q4000. The U.S. government is due royalties on every barrel of oil "extracted" from the well, even those that end up washing ashore in a Louisiana marsh or disappearing with a roar of flame into the air.