Goldman-Sachs Will Justice Be Done? 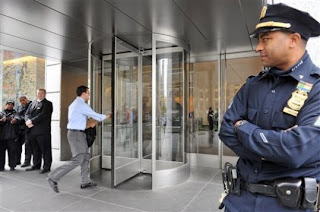 The Goldman-Sachs saga drags on and the question of whether the criminal conspiracy known as the finacialization of the American economy which has raged on for the last 20 years will result in meaningful change. Business Week argues that this is unlikely, thus confirming fears on both the Left and Right:

" No one can have failed to notice the beating that bankers have taken in public opinion in the past two years. Real-estate agents have a better reputation for honesty, and parking inspectors have a higher rating for fairness.

No surprises there. The banks took huge and crazy risks, got ordinary taxpayers to bail them out, then went straight back to paying themselves massive bonuses as if nothing had happened. If that doesn’t send your reputation straight into the gutter, it is hard to know what will.

There is plenty of statistical evidence to show banks have plummeted in public esteem. In Harris Interactive’s latest survey of corporate reputations in the U.S., the banks took a hammering. Out of 60 companies, Goldman Sachs ranked 56th. Citigroup Inc. was at 57th, while Bank of America Corp. and JPMorgan Chase & Co. were also in the bottom 10. Only the tobacco industry fared worse than finance. You can’t sink much lower than that.

That, however, is what Joe Public thinks. Among the corporate and political elite the story is rather different.

A British survey, conducted by the graduate-recruitment Web site TargetJobs, asked 100,000 students which companies they would like to work for when they graduate. Goldman Sachs topped the poll for investment banks. All that terrible press, it seems, hasn’t stopped young people wanting to get their feet under a desk in Goldman Sachs’s offices.

Likewise, Fortune magazine recently published its annual survey of the most-admired companies. Who topped the megabank category? That’s right. Goldman Sachs. It was up from 15th to eighth place in the all-industries ranking, ahead of Wal-Mart Stores Inc. and Coca-Cola Co.

Fortune canvasses the views of more than 4,000 executives, directors and analysts to compile its list. It is a measure of elite, not mass opinion. And in that narrow world, it appears that the big banks haven’t suffered at all.

The message couldn’t be clearer. An avalanche of bad publicity hasn’t really dented Goldman’s reputation, or that of any other major bank, either.

There are two conclusions to be drawn from that.

First, we like our banks to be aggressive and mean. Imagine you were hiring a bodyguard or a divorce lawyer. Do you want one who promises to be conciliatory, kind and consensual? Or one who takes no prisoners? In reality, you want your team to be as nasty and tough as possible. The same is true of investment banking. As gangster rappers say, it pays to be bad.

Second, although there is a lot of waffling about reputation and corporate social responsibility, all that matters is the ability to get the job done. The firm of Nero, Khan (as in Genghis) & Capone would probably win a fair bit of business as long as it got that Greek bond issue sold, or found someone to unwind a position in Florida mortgage derivatives.

There is a moral in that for the investment banks.

They will all spend fortunes in the next couple of years getting their images back in shape. If you happen to have an orchestra you want sponsored, an orphanage that needs a new wing, or a rare species that needs saving from extinction, this is the right moment to send in a polite letter asking for a donation. Don’t forget to mention how their generosity will improve their public image. They will write out a check faster than you can say “giant vampire squid.”

But actually, for keeping the business going, there are only two audiences that really count.

While the banks can still attract the smartest, most ambitious young talent out of the universities, and so long as the people running big corporations still rate them, what the general public think doesn’t matter much.

And while the banks are repairing their images, it would also be worth remembering that they don’t want to go too far in the other direction. It won’t really do them any harm to be known as nasty and greedy -- that is what bankers are there for."
Posted by WINston smITh at 9:20 PM