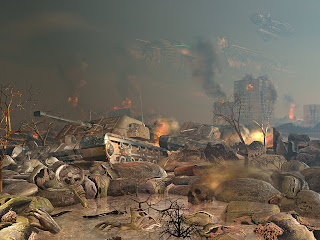 With the recent attention on nuclear arms limitation its important not to loose sight of the stakes of even a "small" nuclear conflict could have. The Bulletin of Atomic Scientists has a sobering article on the climate change that could be produced in even a limited conflict:

" Recent scientific studies have found that a war fought with the deployed U.S. and Russian nuclear arsenals would leave Earth virtually uninhabitable. In fact, NASA computer models have shown that even a "successful" first strike by Washington or Moscow would inflict catastrophic environmental damage that would make agriculture impossible and cause mass starvation. Similarly, in the January Scientific American, Alan Robock and Brian Toon, the foremost experts on the climatic impact of nuclear war, warn that the environmental consequences of a "regional" nuclear war would cause a global famine that could kill one billion people.

Their article, "Local Nuclear War: Global Suffering," PDF predicts that the detonation of 100 15-kiloton nuclear weapons in Indian and Pakistani megacities would create urban firestorms that would loft 5 million tons of thick, black smoke above cloud level. (This smoke would engulf the entire planet within 10 days.) Because the smoke couldn't be rained out, it would remain in the stratosphere for at least a decade and have profoundly disruptive effects. Specifically, the smoke layer would block sunlight, heat the upper atmosphere, and cause massive destruction of protective stratospheric ozone. A 2008 study PDF calculated ozone losses (after the described conflict) of 25-45 percent above mid-latitudes and 50-70 percent above northern high latitudes persisting for five years, with substantial losses continuing for another five years. Such severe ozone depletion would allow intense levels of harmful ultraviolet light to reach Earth's surface--even with the stratospheric smoke layer in place.

Beneath the smoke, the loss of warming sunlight would produce average surface temperatures colder than any experienced in the last 1,000 years. There would be a corresponding shortening of growing seasons by up to 30 days and significant reductions in average rainfall in many areas, with a 40-percent decrease of precipitation in the Asian monsoon region. Basically, the Earth's surface would become cold, dark, and dry......

Here it's important to point out that the 100 Hiroshima-size weapons detonated in Robock and Toon's regional war scenario contain less than 1 percent of the combined explosive power in the 7,000 or so operational and deployed nuclear weapons the United States and Russia possess. If even one-half of these weapons were detonated in urban areas, Robock and Toon have predicted that the resulting nuclear darkness would cause daily minimum temperatures to fall below freezing in the largest agricultural areas of the Northern Hemisphere for a period of between one to three years. Meanwhile, average global surface temperatures would become colder than those experienced 18,000 years ago at the height of the last Ice Age.

Amazingly, however, no follow-up studies have been initiated to further evaluate the decreases in temperature, precipitation, or ozone depletion predicted to arise from either regional or strategic nuclear war. Large studies were conducted in the 1980s on "nuclear winter" by the U.S. National Academy of Sciences, the World Meteorological Organization, and the International Council for Science's Scientific Committee on Problems of the Environment. But given that Robock and Toon's new research has found that these early studies significantly underestimated the climatic and environmental consequences of nuclear war, wouldn't it make sense for such groups to now revisit the subject? At the very least, Washington and Moscow, with 95 percent of the world's nuclear weapons, should be required to investigate the environmental and climatic consequences from a nuclear war created by their nuclear arsenals."
Posted by WINston smITh at 9:52 PM

At this moment I am ready to do my breakfast, afterward
having my breakfast coming again to read other news.
Visit my weblog ; http://www.cheapchirstianlouboutinshoes.com